this season of hope

Everyone needs a Renee. Who the heck is Renee? She is a mentor in my life. She is a woman the Lord brought to me as a gift to hold me accountable, to be an example, and to speak the truth without apology or compromise. She is married with a relationship I admire, and a husband who respects her. She is Godly. She is strong. And… she is real.

I remember when she first came into my life, I was a mess. I surely didn’t know it at the time, but how I was approaching life and relationships at the time was somewhat hazardous to my health! I was particularly careless and short-sighted – definitely in everything for the fun. Which sounds, well, fun. But it has consequences. I’ll give you one of the more extreme examples. I remember one time when I had just broken up with my boyfriend I was dating at the time that I met her. I was at the bar and took a bunch of shots (probably about 4-5), and then because I was upset, I drove over to her house to talk to her and her husband. While they invited me, they had no idea of my “state of mind.” Obviously when I got there, they realized I was not sober and talked to me and drove me home later. Renee has never had a drink in her life. I mean, maybe a sip. So, she certainly couldn’t relate, but was there to hear me through that situation. I have thankfully learned to cope with breakups in a more healthy way since then! But it’s only because of women like her in my life.

As I get into this, I am writing as a woman to women, but what I am discussing is relevant to men also. You can (and should) get something from it, guys.

Here are the primary qualities Renee has that empower her to be effective to speak into my life:

1. She has never judged me.

Even though she could. I’m not saying she should, but just that she could have because the things I have told her would be judged by a lot of Christians – no offense. I have told her about my sins before I commit them and once I commit them, despite my own desire not to. I admit when I stumble. Not only has she never judged me, but she isn’t afraid to tell me the truth of what the Gospel says about my decisions, as well as the love in my repentance and obedience. She is unapologetic in calling me out, but has never turned her back on me. I have always felt that Renee is praying for me and that she believes in my ability to change – much like a mother.

2. She has never made me regret telling her anything.

She has never used what I have told her against me. She has never thrown an “I told you so” at me and she has never suggested a trend. She has always spoken that I was capable of different. This is important because once someone believes something about themselves, such as an embedded trend, it is easy to then accept that as truth in your life. Rather, she always believed I could change.

Because of these two things, I never threw up the white flag in complete surrender to my sin. I fought with her, although oftentimes feeling so weak and defeated in my own ability to fight and while sometimes tempted to completely give in, I relied on the hope that she had in my ability to change. There were other Christian friends I had that did completely fall to their sin, to the point of almost walking away from their faith or denying any check in their spirit. I often wondered why I never got there and why I never walked away and completely gave in to my sin. The answer was… Renee.

That is why I believe that everyone needs this degree of accountability in their life – whether man or woman. 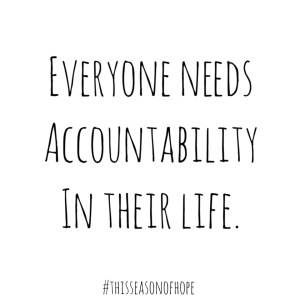 How do you get it? You seek it out before you need it. That is how. Find a woman, or a guy if you are a guy*, who has what you want/fruit on the tree in terms of a marriage you want. (*It is important that this relationship is with your own gender – so important. I will definitely write about this in the future.) Study her. Interview her. What decisions did she make as a single that set up what she has now? How did she date? What struggles did she have and how did she navigate them? You will learn so much from wise women who have walked the path. Their struggles may not have been identical to yours – but you never know. I found out that my Renee was actually engaged prior to her current husband. So, while she couldn’t relate to my alcohol-laden bad decisions from my past, she knew the pain of heartbreak and deserted-ness and rejection.

Then, after you find this person, you tell her what you’re tempted to do even before you do it (and hopefully you don’t do it, of course). You tell her what you want to do so she can warn you of the consequences of those decisions.

I’ll keep being real with you all – I remember telling Renee when I had a new friendship with a guy I admired .. and telling her how much I wanted to just make out with him. She warned me that it would open up spiritual warfare – and temptations that I wouldn’t want to deal with. It is a slippery slope. I chose not to listen to her. And the next year was one of the hardest I’ve ever had because of the areas that I compromised. I remained accountable to her through this time because I wanted to glorify and please the Lord as much as she wanted me to – but it was an extremely hard time with a lot of hurt. I learned so much through that time including why and how to have boundaries. It was a painful experience and one I never want again. Regardless, it’s an experience I will always have and has empowered me to relate to so many women I come into contact with and has afforded me the amazing opportunity to be a Renee to several women.

As you’re reading this, either you’re realizing that you need a Renee or you are one. If you are one, as women are put in your life, please do not judge them and please do not give them cause to regret telling you things. Hold what they say in confidence. Pray for them and don’t shy away from the hard questions. Believe in their ability to be strong and glorify the Lord and give merit to the beauty that comes as they are obedient and trusting.

If you need one, pray for it. Ask the Lord to put that woman in your life. Get to know her story and how she dated: the things she did right and the things she wished she did differently.

And if you have one, cherish it. That relationship is one of the greatest gifts God can give you. Never take it for granted. Tell her today how much you appreciate her.

Alright, ladies (and gents), go be awesome and do it with accountability, grace, and belief in your ability to persevere.

2 thoughts on “Everyone Needs a Renee: Life Mentorship”